LyondellBasell Industries Holdings, stylized as LyondellBasell, was founded in 2007 by merger of Basell Polyolefins and Lyondell Chemical Company.[2] Roots of the company trace back to 1985.[3] LyondellBasell is a Dutch company with British and American roots. The company manufactures at 55 sites in 17 countries and sells products into approximately 100 countries.[4] The main office of LyondellBasell Europe, Asia and International is based in the center of Rotterdam but the company has other headquarters in Housten, London, and Hong Kong. The company employs 19,200 people (2021).[5] Revenue of LyondellBasell was 27.753 billion dollars in 2020.[6]

LyondellBasell is one of the largest plastics, chemicals, and refining companies in the world.[7] As the company is ranked 10th in the global top 50 chemical companies of 2021, LyondellBasell can be considered a key player in their industry.[8]

The company has two main leadership branches, the Leadership Team and the Board of Directors. The leadership team is comprised of senior executives that lead LyondellBasell’s business and staff functions, furthermore, the team oversees operational issues and the implementation of corporate strategies and provides support to the CEO.[9] The Board of Directors is led by Chairman Jacques Aigrain and oversees management and the overall course of LyondellBasell’s business and strategy. The members of the board include the Chairman, CEO, and ten independent directors that are elected annually by shareholders.[10]

Up until December 2021 Bhavesh Patel was the CEO of the company but has now stepped down. Kenneth Lane was the interim CEO and Peter Vanacken has has been appointed the position of CEO starting June 2022.[11]

The remuneration of the Leadership Team is based on the 2021 Annual General Meeting of Shareholders Proxy statement. The remuneration is based on the year 2020 and includes: 1. Salery, 2. Bonus, 3. Stock Awards, 4. Option Awards, 5. Non-Equity Incentive Plan Compensation, 6. Change in Pension Value, 7. All other compensation (Fees or Intercontinental trips, Tax preparation etc.).[13]

The external auditor is PricewaterhouseCoopers Accountants N.V. (PwC).[16] In accordance with Dutch Law, LyondellBasell's external auditor is appointed by the general meeting of shareholders and is nominated for appointment by the Board upon advice from the Audit Committee. In the auditor report, there is no mentioning of climate-related risks.

LyondellBasell is active in the chemical sector with products such as polymers, advanced polymers and fuels. It is one of the largest plastics, chemicals, and refining companies in the world. Furthermore, LyondellBasell is the leading producer of oxyfuels worldwide, as well as polypropylene in North America and Europe.[17]

LyondellBasell did not receive NOW-support from the Dutch government[18], and does not have royal status.[19]

Since the Paris agreement, LyondellBasell has stated that the company supports the goal of net zero by 2050.[20] The company has selected three global challenges that LyondellBasell finds most relevant to their business: Plastic Waste, Climate Change, and Thriving society.[21] Under these challenges LyondellBasell has created five pillars on which the company will build their climate strategy. The pillars are: end plastic waste, advance the circular economy, address climate change, grow sustainable solutions, and enhance the workplace operations and communities.[22]

In 2019, LyondellBasell achieved the first parallel production of polypropylene and low-density polyethylene made from renewable raw materials. These renewable-based polymers are part of their family of sustainable solutions called Circulen. An independent life cycle assessment study showed that the carbon footprint of these polymers is reduced by up to 75% in comparison with fossil-based polymers.[23]

The revenues of LyondellBasell increased by 68%, in 2021 compared to 2020. This large increase can be attributed to average sales prices being higher in 2021 for many of the company's products as sales prices generally correlate with crude oil prices, which increased relative to 2020.[30]

LyondellBasell provides information on both scope 1 and 2 emissions from 2015, 2019, and 2020 in the climate report. LyondellBasell fails to report their scope 3 emissions which leaves out a big portion of their emissions. Scope 3 emissions are therefore also not included in their future climate goals. In order to stay within the existing guidelines in Europe LyondellBasell participates in the European Union emissions Trading System (ETS).[33] Annually the company purchases emission allowances to meet their obligations. The EU sites subject to ETS represent approximately 30% of our total Scope 1 emissions.[34]

LyondellBasell fails to report its scope 3 emissions in their climate reports. Scope 3 often represents the majority of an organization’s total GHG emissions.[35] LyondellBasell, therefore, does not accurately report the company's emissions. 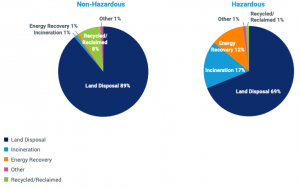 The company's strategy in relation to these goals mostly focuses on using fossil fuels more efficiently. It wants to increase the use of feedstocks from renewable sources and plastic waste. Furthermore, the company wants to increase its renewable energy by using wind and solar energy through corporate power purchase agreements in the U.S. and Europe.[42] LyondellBasell knows it needs to produce 4.9 million megawatt-hours per year from renewable sources by 2030 in order to reach its goal.[43] This would result in a reduction of approximately 2 million metric tons of CO2 from their scope 2 emissions. It is unclear from the report or website how far along the company is in this process. Lastly, it wants to assess breakthrough technologies to enable further decarbonization in their company, but again do not mention what technologies it is referring to. Furthermore, LyondellBasell states that the following approaches will also be used to reach their goals: Enhanced energy management and low emission steam; Flare minimization; Use of lower-emitting fuels; Process electrification and furnace upgrades; and A minimum of 50 percent of electricity procured from renewable sources.[44]

The goal of achieving net-zero emissions by 2050 is not mentioned in LyondellBasell’s 2020 sustainability report. This goal is mentioned on its website on September 19, 2021.[45] LyondellBasell mentions two main steps it will take to reach this goal. Firstly, the company will purchase high-pressure steam generated from natural gas to use at Wesseling olefin ad polyolefin production site to phase-out coal usage. This is expected to reduce its CO2 emissions by approximately 170,000 metric tons per year.[46] Secondly, the company wants to expand its global assessment of flare systems at its major sites. This project aims to optimize product recovery rate and flare operations which caused for a reduction of approximately 79,500 metric tons of CO2 when it was implemented at its European and U.S. sites in 2020.[47]

In the sustainability report of 2020 LyondellBasell states the following goals in relation to plastic waste reduction.[48]

The company mentions that it wants to develop mechanical and advanced recycling solutions and reduce plastic waste from its supply chain but it is unclear from its sustainability report how exactly LyondellBasell want to reduce plastic pollution in the future.

Their thriving society goal is the following: “by 2030 we want to operate safely every day and with zero incidents, zero injuries and zero accidents”.[49]

This goal does not refer to the environmental incidents that were mentioned earlier. This goal focuses on employees, contractors, customers, and neighborhoods. LyondellBasell wants to achieve this goal by building teams that reflect the communities in which the company operates and produce and market products that enable sustainable living.

Image of fire after explosion at LyondellBasell center near Marseille [50]

Two environmental incidents of LyondellBasell made it to the news.

In July 2021, an acetic acid leak resulted in the deaths of two contractors and the hospitalization of 30 others at the LyondellBasell facility near La Porte, Texas.[54] The leak involved a chemical acid used in food grade vinegar, people exposed to this chemical can experience irritation and burns to the skin and difficulties breathing.[55] It was found that approximately 100.000 pound of this acid was released during the leak. Personal injury attorny Miriah soliz said: "They have severe trauma. They're seeing people screaming and yelling, grown men crying, getting flooded with gas and fumes. Unable to breathe, making them very ill, and not knowing whether their friends survived or not."[56] On the official La Porte complex part of the LyondellBasell website this incident is not mentioned.[57]

In July 2015, an explosion occurred at the same time in two tanks at the LyondellBasell complex near Marseille.[58] The explosion followed by a fire did not cause any casualties as it happened at around 3 am. Around noon the next day the fire was under control. The fires are suspected to be set as a result of criminal activity.[59] The bouches-du-Rhône department stated that the smoke did not pose immediate health risk to surrounding areas.[60]

LyondellBasell is one of the biggest companies in the chemical sector worldwide. With 55 different manufacturing sites in 17 countries, and selling products in to approximately 100 countries, this company has a moral responsibility to be a leader in fighting climate change.

LyondellBasell has set clear climate goals for 2030 and 2050. However, the way in which the company aims to achieve these goals is not specified clearly enough in their reports. Its lack of detailed plans makes it difficult to get a clear idea of how the company wants to achieve its own goals. Furthermore, in the climate report scope 3 emissions of LyondellBasell are not taken into account, causing its data to not be complete.

As the scope 3 emissions are not included in its emission calculations, the 2030 and 2050 goals are not good enough to stay within the 1.5 degrees. Therefore, the plans of LyondellBasell do not meet the requirements set by the Paris Agreement.