Stellantis N.V. , stylized as Stellantis is an international automotive producer. [1] The company was created in January 2021 through a merge of Peugeot S.A.(PSA) into Fiat Chrysler Automobiles N.V.(FCA). The surviving company in the 'merger' was renamed Stellantis NV. [2] Stellantis owns 14 automotive brands (Abarth, Alfa Romeo, Chrysler, Citroën, Dodge, DS Automobiles, Fiat, Jeep, Lancia, Maserati, Opel, Peugot, Ram, and Vauxhall).[3] Stellantis' headquarters are located in Amsterdam, the Netherlands. In 2021 Stellantis had a total of 281,595 employees.[4] The company has industrial operations in nearly 30 countries and consumers in more than 130 markets. [5] Revenue of Stellantis was 149.42 billion euros in 2021 of which 14 billion euros was profit [6]

With annual sales of approximately eight million vehicles, Stellantis is ranked as the fourth-largest global automaker by volume.[7] With this ranking, Stellantis is without question a key player in its industry.

The Board of Directors is responsible for the management and strategic direction of the group. [8] After the merge in 2021 a new executive board was created. Only John Elkann and Andrea Agnelli stayed on as members.[9]

The independent auditor of Stellantis is Ernst & Young Accountants LLP.[13] In the Independent Auditor Report of 2021, they state that assessment of the climate-related risks and the possible effects of the energy transition did not result in a separate key audit matter.[14] The years before that, climated-related risks are not mentioned. In 2018, however, one of the key audit matters was the US emissions investigations.[15] Beginning of 2019, settlements were reached and in the report of 2019, this was not a key audit matter anymore.[16]

Stellantis manufactures and markets automobiles and commercial vehicles.[17] The company also produces metallurgical products and production systems for the automobile industry, as well as owns publishing and insurance companies.[18]

Stellantis has not received NOW support from the Dutch government. [19] Stellantis does not have Royal status.[20]

In 2016 PSA created a roadmap called the Push to Pass plan.[21] Through this plan the company outlined their vision for 2030: to be the most efficient car manufacturer and the preferred global supplier of mobility services.[22] This plan illustrates the company's decision to update various parts of the company such as the innovation processes, the production processes and its stakeholder communication.[23] This plan has helped PSA in shifting their customer's expectations. Furthermore, PSA states that this made them sustainable competitive.[24]

In the newest CSR report from Stellantis, no information on the amount of CO2 emission is given. Stellantis does provide a breakdown of the percentage per scope. In this, it is shown that the largest footprint comes from vehicles sold in scope 3 as it is 85%.

Total carbon footprint of vehicles sold by Stellantis in Europe [39]

FCA reports direct CO2 emissions based on direct energy consumption with the aid of the IPCC 2006 conversion factors. The company reports indirect CO2 emissions according to the standards and guidelines outlined in the GHG Protocol.[46] FCA states that emissions of greenhouse gases (GHGs) other than CO2 have a negligible impact and are therefore not included. CO2 represents more than 99% of the Group’s total GHG emissions.[47] 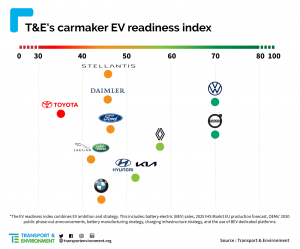 The emissions for both PSA and FCA are surprisingly low for automotive producers. This can be attributed mostly to the low reporting of the companies' scope 3 emissions. PSA reports for their scope 3 emissions purchased goods and services and business travel, these are only two of the 15 different sectors that are included in scope 3 emissions.[52] FCA only reports upstream and downstream emission from Logistics Processes in really low numbers. This leaves out a large portion of the CO2 emissions from both companies and therefore their emissions cannot be seen as complete.

Most of the emissions from PSA and FCA, and therefore also Stellantis fall under the use of products. As there is data lacking on this section of their emissions some calculations were done to get an estimate. According to an article posted by de correspondent, a petrol car produces around 50 tons of CO2 over its lifespan. [53] In 2020 Stellantis sold 6,2 million cars.[54] This means that in 2020 Stellantis produced 310 megatons of CO2. This shows just how much information is missing from the current annual reports, as they are not reporting on their largest section.

Given its main sources of greenhouse gas emissions, Stellantis' climate plans are focused on three issues[55]:

3. Improving the environmental performance of the supply chain

For each of these issues, Stellantis has created a short-term, medium-term, and long-term commitment.

To establish its targets, Stellantis referred to the Science-Based Targets initiative (SBTi) methodology.

In 2021 FCA was fined $30 million after the company pled guilty to federal criminal charges related to corruption.[57] As part of the punishment an independent monitor, Frances McLeod, will keep tabs on FCA for the next year, therefore also affecting Stellantis. FCA corrupted United Auto Workers (UAW) leaders by giving millions of dollars in gifts and cash. One of the attorneys on the case stated that "the sentencing of FCA marks a significant milestone in this historic case". [58]

An article posted by Transport & Environment showed that Stellantis ranks worst with low short-term battery electric vehicle sales. The article states that Stellantis together with other companies such as BMW, do not have ambitious phase-out targets and no clear industrial strategy.[59]

Stellantis has released its plans at the beginning of March, in which it is stated that the company aims to reduce CO2 emissions from scope 1 and 2 by 75% in 2030 and aims to be carbon net-zero by 2038 relating the whole value chain. One of the steps taken by Stellantis to reach these goals is to increase the sale of battery electric vehicles but as this is only stated to be to 50% in the U.S. As 81% of Stellantis' emissions is from cars sold a goal of selling 50% electric vehicle in the U.S. is not enough to create a large reduction in CO2 emissions. Futhermore, Stellantis aims to reduce their CO2 emissions by obliging their suppliers to on their way to climate neutrality, and in 2030 they commit to Carbon Net Zero of the supply chain with minimal compensation. Little is stated on exactly how Stellantis aims to do this. A clear overview of the company's climate impact is lacking as there is no data given on the amount of CO2 emissions.