Unilever PLC is a British multinational consumer goods company, with its headquarters in London, United Kingdom. The company has over 400 household name brands, of which 81% are the top two in their market and 13 had a turnover of more than €1 billion in 2021. [1] Unilever's products are sold in over 190 countries and are used by 3.4 billion people every day. [2] Unilever is organized into three main divisions: Beauty & Personal Care, Foods & Refreshments, and Home Care. These divisions had a respective turnover of €21.9 billion, €20.0 billion, and €10.6 billion in 2021. [3] The company has 148.000 employees and their turnover in 2021 was €52 billion. [4] [5]

Unilever Netherlands employs more than 2,500 people. Rotterdam is home not only to the Unilever Benelux office, but also to the company's International Corporate Center, which houses its European marketing and innovation hub. Unilever has a production facility in Hellendoorn, which produces ice cream. In December 2019, the new Unilever Foods Innovation Center (also known as HIVE) was opened in Wageningen. In HIVE, they work on "groundbreaking innovations and research to provide food for the growing world population in a sustainable and nutritious way". [8]

The factories in the Netherlands and Belgium as well as Unilever Foods Innovation Center Wageningen and Unilever's international Corporate Center in Rotterdam are not part of the Unilever Benelux organization. [9]

Note: remuneration data was reported over the year 2021.

KPMG has been Unilever's accountant since 2014. [15] In the independent auditor report attached to the annual report 2021, KPMG adds quite an elaborate part on cllimate-related risks for Unilever. They state that '[t]he most likely potential impact of climate risk and plans on these financial statements would be on the forward-looking assessments of longterm assets.'[16] However, they 'determined that climate related risks did not have a significant impact on our audit and there is no significant impact of these risks on our key audit matters.'[16] Prior to 2021, there was no mentioning of climate-related risks in the reports.

Unilever was formed from a merger between the Dutch margarine producer Margarine Union and the British soapmaker Lever Brothers Limited on January 1 1930. [17] They have a holding company named Unilever PLC and N.V. with an Anglo-Dutch structure. On November 30 2020, it was announced that the unification of Unilever's Dutch and UK arms under a single London-based entity was completed. Besides the unification, the company's operations remained the same and the listings on the Amsterdam, London, and New York stock exchanges were maintained. [18] Unilever's products include food, condiments, ice cream, wellbeing vitamins, tea, coffee, cleaning material, pet food, beauty products and personal care. Unilever is one of the most influential consumer goods companies in the world, being named as the company with the most brands in the Kantar Worldpanel Global Top 50. [19] The 13 Unilever brands that are in the top 50 are Lifebuoy, Sunsilk, Knorr, Dove, Lux, Sunlight, Pepsodent, Surf, Rexona, Vim, Brooke Bond, Close Up and Lipton. [20]

Unilever does not have royal status. [21] Unilever has not received NOW support from the Dutch government. [22]

Unilever has pledged to be "carbon positive" by 2030. This is mainly a marketing term that organisations use to describe climate positive and carbon negative. Unilever has collaborations through international alliances. They have been experimenting with different forms of internal carbon pricing schemes, this is the concept of applying a cost to each tonne of carbon emitted. They will not finance assets within their operations which are inconsistent with achieving a 100% reduction in Scope 1 and 2 emissions by 2030.[23] Scope 3 is not included in this measure. Unilever has pledged to halve their use of virgin plastic by 2025 and to design all their packaging to be fully reusable, recyclable or compostable.[24]

The table below depicts the financial situation of Unilever's global activities.

Unilevers' emissions are further broken down into categories in the table below. The data[35] is from 2021. 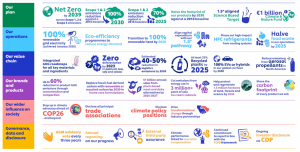 In March 2021, Unilever released their 'Climate Transition Action Plan', in which they set out three principle targets that guide their actions:[42]

These targets are designed to to deliver an emissions reduction pathway in line with the 1.5°C ambition of the Paris Agreement. In addition, they want to halve the full value chain emissions of their own products on a per consumer use basis by 2030 against a 2010 baseline, and they plan to donate 1 billion EUR to the Climate & Nature Fund. Lastly, Unilever states that their primary focus for the 2020s and 2030s is not offsetting, but emissions reduction.[43]

Unilever has claimed to use '100% renewable grid electricity as of 2020. [48] However, electricity is mostly sourced through lower quality constructs with unbundled RECs (Renewable Energy Certificates) constituting 60% of the company's total renewable energy procurement in 2020. [49] Unbundled RECs are RECs that aren't paired with the underlying energy, resulting in the environmental impact being highly uncertain due to potential for double counting the renewable electricity. While unbundled RECs will check the box on a sustainability report, Unilever should look for other ways to acquire RECs that result in more energy coming online if their supposed goal is to combat climate change. [50] [51] [52]

Keep the broader context in mind. Is the company integer when it comes to deforestation, palm oil, biodiversity, human rights etc etc? Be critical in the sources used here.

In 2001, the Indian subsidiary of Unilever (HUL) was forced to shut its thermometer factory after authorities found the company was caught contaminating the environment by dumping more than 2 tonnes of toxic mercury waste in a densely populated part of the South-Indian town of Kodaikanal [53]. The same thermometer plant was already moved from New York to India in 1984 over environmental concerns. Although Unilever reached a financial settlement with a workers association of the defunk factory, the site was not decontaminated. In 2005 environmental activists launched a global campaign to force Unilever to clean the toxic waste. Unilever finally agreed to initiate pre-remediation work in 2009 [54] and the cleansing of the site has yet to be completed [55]. In a 2011 study conducted by the Government of India, it was concluded that many workers suffered from illnesses caused by workplace exposure to mercury. [56] However, Unilever denied that local people and workers at the factory may have been exposed to the highly toxic metal. [57]

In 2011, SOMO released a report on pressing issues at Unilever's Tea Estates in Kenya and India. The study found that the working conditions on these tea estates were problematic, despite having received certification from the Rainforest Alliance (RA). On all the RA certified estates in India there were issues with wages either including too few benefits or partly being paid in kind and not in cash. In addition, female workers were being discriminated against, many casual workers remained permanently casual and workers were applying pesticides without protective gear. Most of these issues constitute violations of both Indian labor legislation and Unilever's own standards for suppliers. [58]

On Unilever's own tea plantations in Kericho, Kenya, workers reported sexual harassment and gender discrimination. One of the interviewed workers said that "sexual harassment is a serious problem because all the supervisors are men. Some of them want you to go beyond your work obligations and satisfy their sexual needs and if you don't do that, they fake other charges against you or give you too much work or allocate you lonely or dangerous plucking zones." In addition, the housing conditions for casual workers were very poor and many de facto permanent workers still had casual status. These are all violations of ILO, RA standards and Unilever's own code of business principles (CBP). [59] In 2014, 7 years after instances of sexual harassment at the estates came to light, Unilever introduced a new action plan to address the issue on its tea plantation in Kenya. [60]

In 2019, Unilever was the biggest buyer of palm oil, representing roughly 3% of global sales. [63] Around 2000, pressure groups such as Greenpeace put deforestation at the top of the agenda. Eventually, this resulted in the creation of the Roundtable on Sustainable Palm Oil (RSPO), of which Unilever is a founding member. Using RSPO, Unilever states on its website that 100% of the palm oil used in their products is sustainably sourced. [64] However, Amnesty International published a report in 2016 in which they brought to light that Wilmar International, one of Unilever's palm oil suppliers, profited from child labor and forced labor. Some workers were forced to work long hours under the treat of having their pay cut, were paid below minimum wage, and suffered severe injuries from paraquat, an extremely toxic and banned chemical. [65] Greenpeace stated that "RSPO standards are inadequate, poorly enforced and offer palm oil consumers no guarantee that the oil they buy has been produced responsibly". [66] Amnesty International's report states that "the RSPO is acting as a shield which deflects greater scrutiny of Wilmar's and other companies' practices". [67]

A 2019 audit of plastic waste by NGO GAIA revealed Unilever as the second worst polluter in terms of collected plastic pollution in the Phillipines and she was number 7 in a global brand audit in 2018, which represented 239 cleanups spanning 42 countries. Despite the company claiming that it has reduced its overall waste footprint per consumer, Unilever's volume of single-use plastic and other packaging has remained the same since 2010 and so has her use of post-consumer recycled plastic. [68] According to a 2020 report, Unilever’s pollution footprint amounts to 70,000 tonnes per year – covering more than 11 football pitches a day. Especially in developing countries, where waste often isn't properly managed but ends up being burned or dumped, packaging waste causes serious harm to the environment and people's health. [69]

Sachets with laminates - such as Unilevers' shampoo sachets - are particularly harmful. [70] These small sachets consist of three layers of different types of plastic which makes them difficult to recycle and therefore uninteresting to collectors. This type of disposable packaging was initially meant to make products accessible to country’s poorest inhabitants but the sachets have made their way into middle class bathrooms as well. Market analyst Euromonitor claims that in Asia over 70 per cent of all shampoo is now sold in sachets and Unilever’s Indian subsidiary alone sells some 27 billion sachets each year. [71]

To meet their pledge about collecting more plastic than selling (achieving so-called "plastic neutrality") multinationals such as Unilever have started excavating landfills in developing countries, selling their invaluable contents to the cement industry for incineration as an alternative fuel. According to the Plastic Soup Foundation this is not a good development as it does not decrease multinationals' own production of plastic and does not motivate full recycling of the waste in these landfills, especially if the cement industry is made to be dependent on it. [72]

Unilever was an early adopter of sustainability at a time when a uniform definition of the concept was lacking. This enabled the company to set the rules of the game before the authorities could by launching the Sustainable Living Plan and Sustainable Agricultural Code in 2010. Using their own guidelines, Unilever has increased their portfolio of products with 'sustainably grown' ingredients but in practice these norms are only marginally different from the norm applied in regular agriculture. [73]

In 2019, Unilever workers from Durban, South Africa, organized a peaceful protest at the company's facility in the city. The Food and Allied Workers' Union (FAWU) stated that private security forces, which were hired by Unilever, attacked the strikers by shooting at them with rubber bullets and paintballs, and using pepper spray. This all occurred when workers were attempting to walk to their cars that were parked on premised agreed on by both parties. The FAWU released a statement in which they said that "four of our members were seriously injured and two of them have opened criminal cases against the security guards in question". [74]

Unilever has admirable ambitions and some concrete plans. As it turns out however most of their emissions stem from their Scope 3 whereas most of their measures and plans are targeting Scope 1 and 2 emissions. For Unilever to achieve actual net zero and follow the 1,5 degrees pathway they must take their Scope 3 into more thorough consideration and revise their actions to achieve their goals.