Uniper SE was founded in 2016, formed by the separation of E.ON's conventional generation and international energy trading business into a new independent company.[1] After the separation became effective on January 1st 2016, Uniper assumed control of the energy company's fossil fuel assets, hydro assets and global energy trading activity, while E.ON shifted its focus to renewables, energy networks, and energy efficiency services.[2][3] As of 2021, the company has 11,494 employees and has operations in more than 40 countries.[4][5] The corporate headquarters of the company are in Düsseldorf, Germany[4] In 2021, Uniper SE reported a loss of 4,106 million euros.[4]

Uniper Benelux N.V., stylized as Uniper, is a subsidiary of the German Uniper SE, with its headquarters in Rotterdam, the Netherlands.[6] E.ON Benelux passed into Uniper Benelux in 2016, subsequent to the separation of Uniper SE and E.ON into two separate companies. Following this separation, E.ON transferred its coal and gas-fired power stations in Belgium and The Netherlands to Uniper in 2016.[7] E.ON became active in the Netherlands after the acquisition of Elektriciteitsbedrijf Zuid-Holland (EZH) for a sum of 1.1 billion euros. In 2005, E.ON Benelux bought the supply company NRE Energie and Q-Energy in Eindhoven.[8] Uniper Benelux produces electricity, heat and steam in the Netherlands and has four locations across the country (Maasvlakte, Rotterdam, The Hague and Leiden).[9] The Uniper Energy Hub Maasvlakte produces energy on an industrial scale and plays an important role in the Netherlands, providing up to 7% of the total electricity demand.[10] Rotterdam ('RoCa', Rotterdam/Capelle aan den IJssel), The Hague and Leiden have city power stations that focus on the reliable supply of energy in the built environment.[11] In the Netherlands, approximately 300 people are employed for Uniper.[12] While Belgium does not have any production plants for Uniper Benelux, its products are supplied to the business-to-business market.[13]

Uniper is a public company that operates in many countries, most notably in Germany, Sweden, the United Kingdom, Belgium, the Netherlands, Russia and Hungary.[14] Additionally, the company has offices in several international locations, namely Turkey, Azerbaijan, Canada, Singapore, the United States, India and the United Arab Emirates, to support their activities outside of Europe.[15]

There is no elaborate information available on the leadership structure at Uniper Benelux. However, what is known is that Pieter van Stratum, Dyonne Rietveld and Yolande Verbeek are on the Management Board.

In most cases, no information on remuneration of the management board is made public.

Uniper is an international energy company that operates in more than 40 countries. Uniper's main activities concentrate on gas-fired power plants, coal-fired power plants, nuclear power plants, hydro power plants, regasification, gas storage, gas infrastructure, energy sales (large and small costumers) and trading. [25] With 34 gigawatts (GW) of generating capacity, Uniper is one of the world's largest electricity producers. [26] Uniper's main activities are gas and hard coal production, but the company also has high-polluting lignite (brown coal) plants in Germany and Russia, nuclear power plants in Sweden, and hydro power plants in Sweden and Germany. [27] Most of the company's generating capacity, namely 10.8 GW, comes from their Russian activities. [28] Uniper operates in Russia under the name Unipro, a subsidiary company, and is one of the leading energy companies in Russia, constituting approximately 5% of Russia's electricity production. [29]

Uniper is listed on the Frankfurt Stock Exchange. As of August 2020, Fortum has raised its stake in the German Uniper to 75,01%. This is enough to implement a domination agreement, which would give the Finnish energy firm access to all finances and cash flow. Fortum has, however, ruled out any domination or profit and loss transfer agreement or squeeze-out of Uniper's minority shareholders until the end of 2021. [30]

Uniper does not have royal status.[31] Uniper has not received NOW support from the Dutch government.[32]

According to the Climate Action 100+ Net-Zero Company Benchmark, Uniper's latest disclosed GHG emissions are not alligned with the Paris Agreement's goal of limiting global warming to 1.5°C. [33]

In several years, the company reported losses. Nevertheless, in every year dividends were paid to the shareholders.

In 2021, the revenues were much higher than in 2020 because they are reported in spot prices, which have risen considerably in 2021.

As can be seen in the table below, Uniper has provided incomplete reporting of their emissions up until 2021. A large part of the company's emissions are scope 1 emissions, which is logical since Uniper is one of the largest global energy companies. Notably, the scope 1 emissions increased by 8,3 megatonnes from 2020 to 2021, despite the reduction trend observed from 2015 to 2020. The reason for this increase is largely due to the increased output from Uniper's coal-fired power plants, namely Ratcliffe in the UK, Datteln 4 in Germany, and Shaturskaya in Russia. [38]

Emissions due to European and Russian generation

Emissions due to Dutch generation 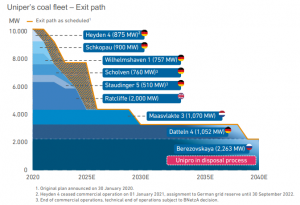 Figure 1: Overview of the exit path of Uniper's coal fleet [38]

In March 2020, Uniper committed to making its power generation portfolio in Europe climate-neutral (for Scope 1 and 2) by 2035.[47] In December 2020, Uniper further committed to reduce carbon emissions by at least 50% by 2030 compared to 2019 in the European generation sector and to net zero by 2050 at the latest (for Scope 1, 2, and 3 emissions).[47] In their 'Sustainability Report 2021', Uniper defined a reduction target for Scope 3 indirect emissions of 35% in 2035 compared to the base year 2021. [38] The company further mentioned kicking off the development of a renewables and hydrogen portfolio and announced growth ambitions of up to 1.5 to 2 GW of renewables until 2025 and up to 1 GW electrolysis capacity for green hydrogen. [38] Compared to Uniper's generating capacity of 34 GW this would represent just around 9% of the total capacity.

At the end of 2021, Uniper owned and operated around 6 GW of coal-fired capacity in Europe. However, most of this capacity will soon be closed in line with their coal fleet exit path (see figure 1). [38] The company does not mention a specific reduction plan for their gas production, which constitutes more than 50% of their generating capacity. [48] On the contrary, Uniper actually mentions that gas will play a key role as a bridge to a zero-carbon future by replacing coal, and that therefore gas will remain an important focus of their commodity trading. They do mention that they will strive to make gas-based businesses more sustainable by "exploring ways to decarbonize upstream and downstream emissions" through working with its suppliers and customers on efforts to reduce these emissions. Uniper also expressed an intent to use their position as a leading gas merchant to help establish global trade in 'climate neutral' gases and other climate-friendly energy. [38] However, the company has not expressed the necessity to move away from all carbon-intensive energy sources.

Another target was to conduct at least 20 projects whose aims include decarbonization by 2022. By the end of 2021, Uniper had 35 decarbonization projects underway. [38] An example of such a project is the building of the Pjelax-Böle and Kristinestad Norr wind farms near Finland's west coast. This project is the first project initiated by Uniper and Fortum's joint organization for developing wind and solar projects in Europe. In partnership with the Finnish energy company Helen Ltd, the farms' 54 turbines, with an aggregate capacity of 380 MW, are expected to be fully operational by mid-2024. [38] In September 2021, Uniper's renewables business entered into a strategic partnership with Denmark-based Ørsted, a leading developer of off-shore wind farms. [38]

Keep the broader context in mind. Is the company integer when it comes to deforestation, palm oil, biodiversity, human rights etc etc? Be critical in the sources used here.

Uniper is the majority owner of the Russian company PAO Unipro with 83,73%.

Uniper has submitted a claim of millions to the Netherlands in 2021, because its coal-fired power station on the Maasvlakte has to close earlier. The ISDS (investor state dispute settlement) clause, part of the Energy Charter Treaty (ECT), allows companies to bypass national courts to claim billions in damages if their profits are compromised. The European Court of Justice ruled at the beginning of September 2021 that the Energy Charter Treaty cannot be used within the EU.[49]

Uniper is a major international energy generation and trading business. Uniper's Benelux Scope 1 emissions accounted for 2% of Dutch greenhouse gas emissions. [50] Despite the company's position, they have only started to publish an overview of their complete emissions in 2021. While Uniper has set targets to have their generation activities reach carbon neutrality by 2035 and to reduce their operational emissions (Scope 1 and 2) by 50% by 2030, they have not set interim targets to reach these goals. In addition, the company has not included appropriate reduction targets for their Scope 3 emissions.